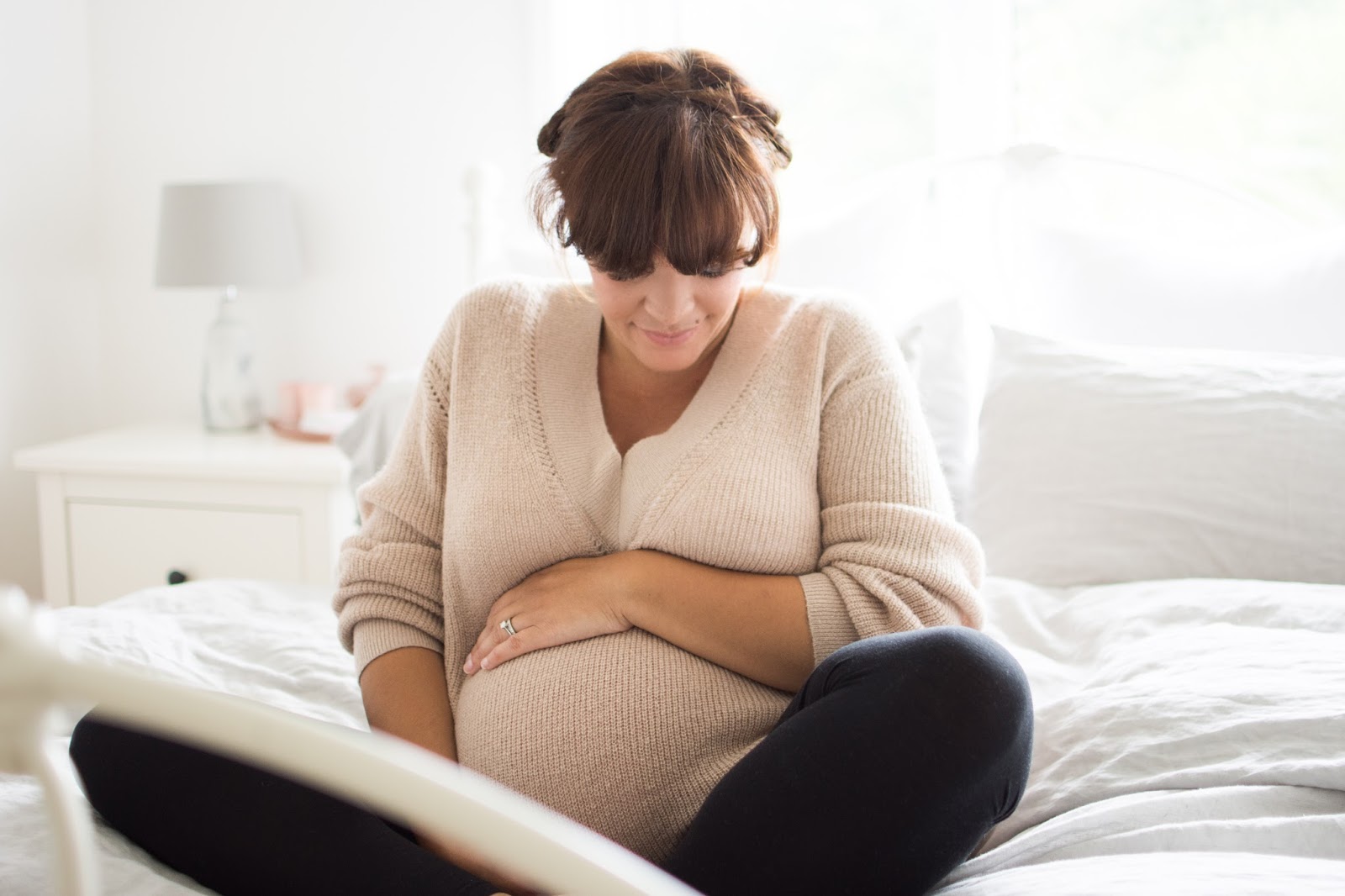 I’ve tried to write this blog post multiple times.  For some reason I can’t find the words to describe how I’ve felt over the last nine months without crying my heart out. I guess despite being in a good place now, it’s hard to ignore the really crappy moments I had during my pregnancy.  & how these feelings still feel raw.

This week is Pre and Postnatal Depression Awareness Week with the charity PANDAS foundation.  They are an organisation that aims to highlight mental illness during and after pregnancy and offer support to those suffering with depression, anxiety and OCD.  Quite fitting as I wanted to share with you how I felt during my pregnancy and the measures I put into place to avoid postnatal depression (PND).

There were many moments during my 2nd pregnancy when I thought, I should have been happy with one baby.  I even said it out loud to my husband numerous times, now looking back it breaks my heart.  Especially as I write this, my beautiful son Georgie is laying next to me in his Moses basket.  Already at 3 weeks old, I couldn’t imagine life without him.  He already fits perfectly into our family, how could I have wished him away.

So why had I felt this way?  And how did I overcome those crappy moments to come out the other side without suffering with PND? 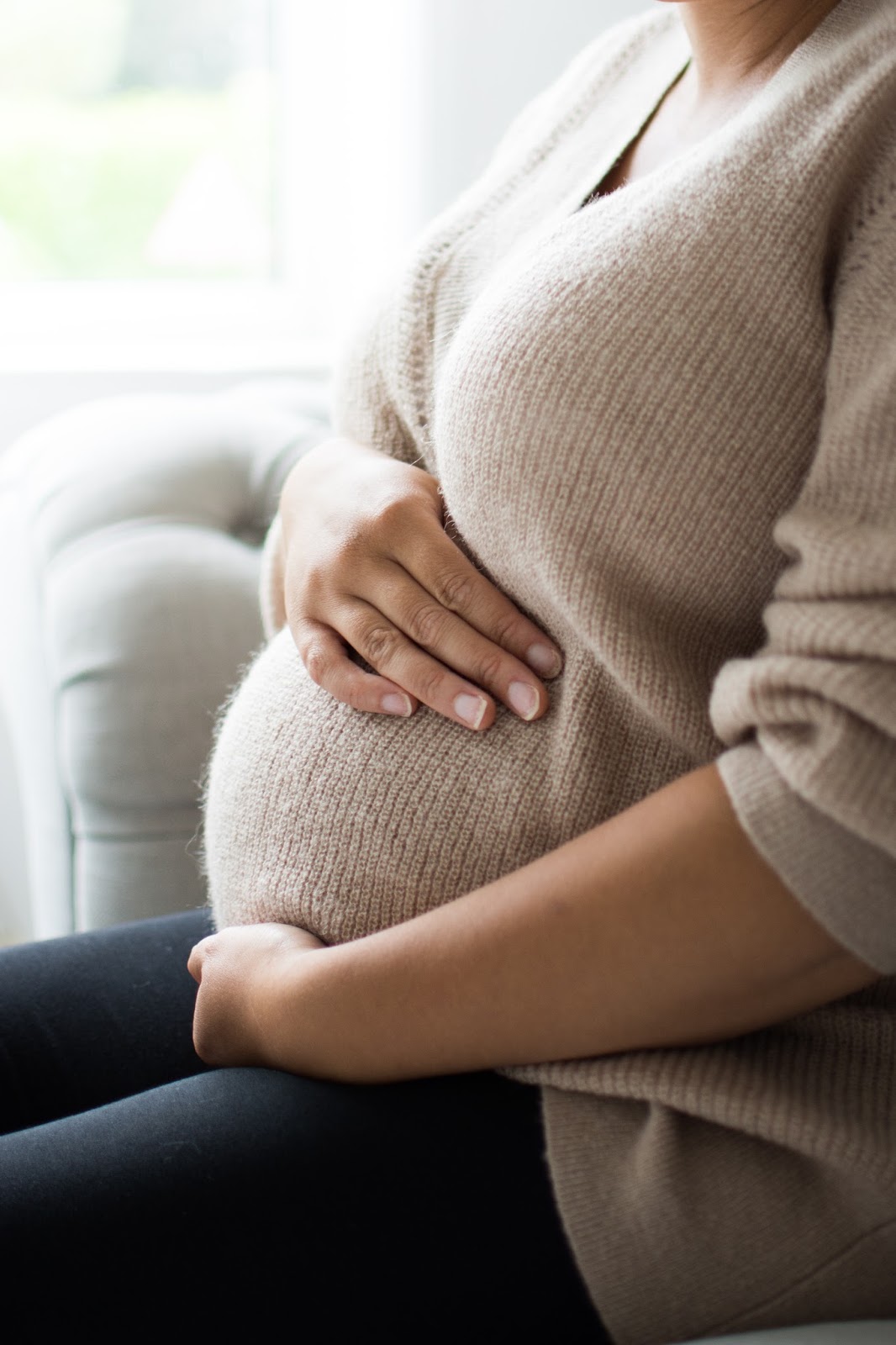 I guess I would have to revisit my 1st pregnancy and the birth of my truly scrumptious son Henry.  I wrote about his birth in detail here, however in brief this is what happened:

My Little Monkey was in no hurry to come out, so on day 11 post due date, I went through a lengthy induction process which resulted in a failed delivery.  Henry’s little head was stuck so I had to have a C-section, something that was never in my inflexible birth plan.  Completely exhausted and still feeling the after affects of my pain relief, I was placed on a ward alone with my new baby.  A baby I didn’t believe I’d given birth too, despite him laying next to me and my tummy being empty.  This overwhelming sense of being cheated consumed me and I suffered panic attacks for days.

Thankfully I had 2 incredible midwives that recognised the signs instantly for post-traumatic stress and I received the counselling I needed to avoid PND.  But that helpless feeling stayed with me and took away my desire to have another baby.

However somewhere along the way, my need to give Henry a sibling outweighed my 2nd birth fears and it didn’t take long for me to become pregnant.  As soon as it happened I felt a mixture of excitement and complete and utter fear.  I kept asking myself, what could go wrong this time?

During my pregnancy with Henry, I also suffered with Pelvic Girdle Pain, an excruciating condition that affected my pubic bone and back.  With Henry the pain was manageable until the end, however with Georgie, the pain was instant and debilitating.

So not only did I have anxious feelings about the birth, I also embarked on a painful 9-month pregnancy.  My PGP came back with such force that I was on crutches by week 14 and spent our summer holiday being pushed around in a wheel chair. I became depressed quickly.  I was also signed off work very early, so being at home with my thoughts didn’t help matters either. 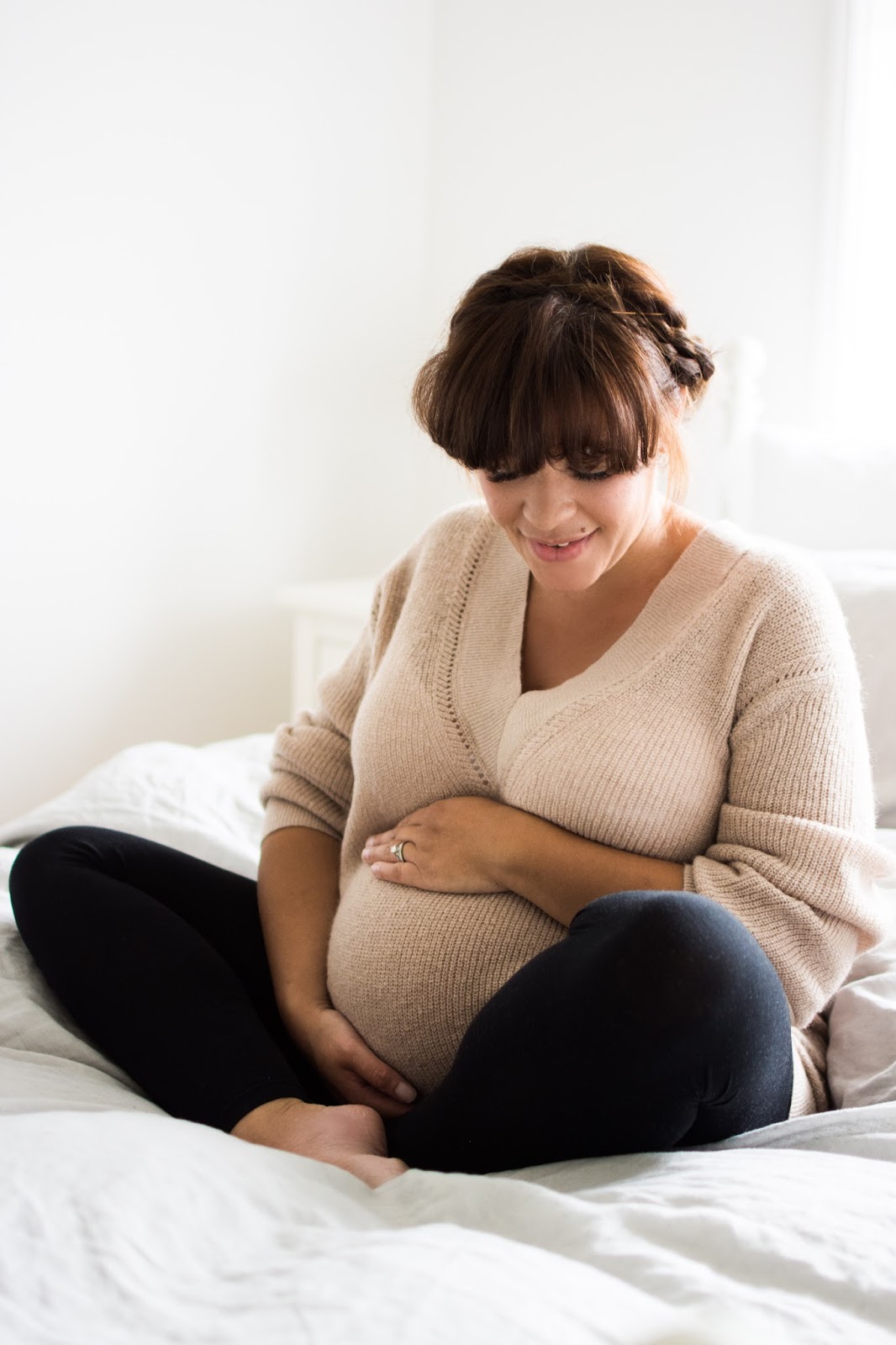 I quickly realised that the impact of my previous experience would need to be addressed, so I could process my thoughts and emotions to help make peace with my sense of failure.  Below are the things that I felt helped me on my journey to ultimately overcome depression.

1. Review the medical information about your previous birth

Firstly I met with my midwife Jenny, who was one to the incredible midwives that put me mentally back together after Henry.  Jenny had seen first hand my panic attacks and instantly signed me up for counselling sessions at my maternity hospital, the Liverpool Women’s.  The first meeting was with a senior midwife who came fully prepared for our first meeting, as she had read my previous birth notes.   I will never forget the moment she told me that I had done everything I could to deliver Henry; it was everything I had needed to hear.  She advised that after 2 days of labour, I should be proud of how far I got.  Even when Henry was turned into the perfect position for delivery, he was still stuck.  This was a huge relief as I always felt like I had failed.  Had I pushed hard enough for example.  Previous to this meeting I hadn’t decided whether I was go try for a VBAC (vagina birth after a caesarean or an elective C-section.  Unfortunately due to the nature of Henry’s birth, the odds were against me, so for Georgie it would be the later.

I vocalised how I never felt like I had given birth to Henry and not being able to hold him straight away after he was born had left me feeling detached.  Thankfully the midwife understood, therefore we went through possible plans to ensure I never felt like this again.  Plans such as, lowering the curtain during surgery and seeing my baby being lifted out.  Skin to skin as soon as possible.  Help with breastfeeding and ensuring my husband and Mum came with me to the ward to help me settle.  These were all placed into my birth plan and I felt more in control this time around.

2. Introduce yourself to your new baby – early

Another measure we put into place was meeting our little baby before he was born.  I wanted to make him feel real from the start, rather than waiting for him to be welcomed into the world.  So we had a gender scan that revealed we were having a boy.  I instantly went shopping for clothes and started to bond with Georgie earlier rather than later.  I could also visualise I was having a boy, talk to Henry about his baby brother and see how we would be as a family.  I loved him already.

My husband was also incredibly supportive.  Just by simply saying “you are doing great” lifted my spirits.  Especially on the days I didn’t realise I needed to hear it.  He also took on a lot of the responsibilities that came with Henry.  I was unable to lift Henry, play with Henry or even take him to the park.  My PGP was so bad that I felt like I had failed him as a Mum.

My husband and I made lists of what I wanted to do with Henry once I got back on my feet.  This weekend we took Henry to the Zoo and it felt amazing to do something normal as a family. 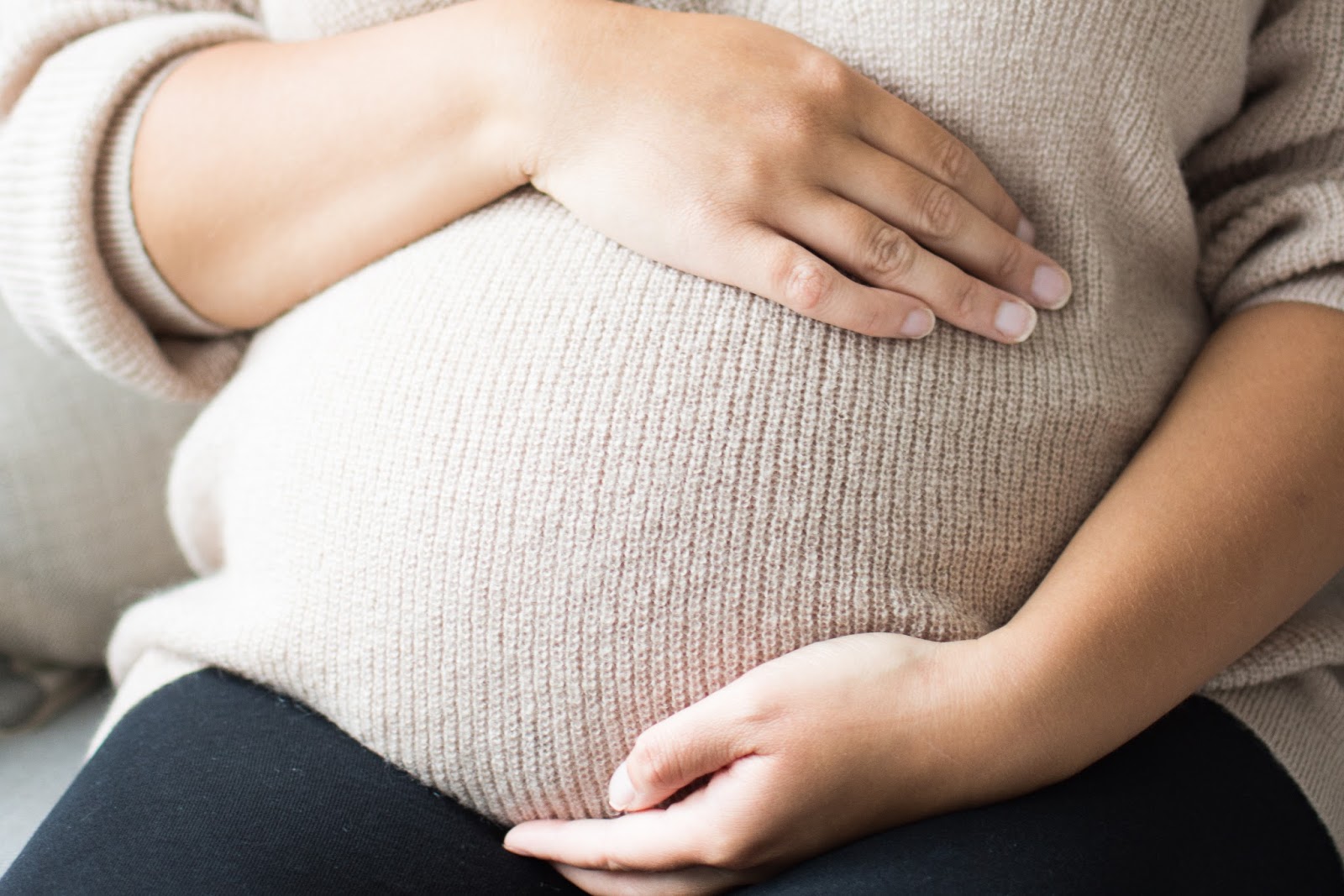 Another aspect that helped immensely was having one to one Sophrology sessions with an incredible woman called Paula. Sophrology incorporates elements of hypnosis, visualisation, meditation, mindfulness, breathing and simple movements for relaxation in a structured set of exercises.  These physical and mental exercises, when practiced regularly, help lead to a healthier state of mind.  Each week Paula would take me through such exercises to bring me into the present, to reinforce positive action and to develop an objective reality.  Ultimately reducing the emotional issues that I had developed since having Henry.  Those feelings of stress, fear and anxiety, were replaced with good connotations of love, calm and strength.  By simply visualising my honeymoon with my husband, my body would fill with how incredibly happy I was at that time.  Therefore this became a popular exercise with me when I felt overwhelmed with my thoughts.

To put it into context, during my spinal my body started to shake uncontrollably and I became unbelievable scared.  By taking myself away from the operating table and onto the beaches of the Maldives with simple breathing exercises.  I was able to calm my body so the spinal could be inserted.

Continuing to use Sophrology techniques following delivery may help women adjust to motherhood, enhance their relationship with their babies, ease postnatal physical discomforts and emotional issues and possibly prevent or relieve the intensity of postnatal depression.

Paula got me to face head on that my PGP wasn’t going to go away.  It is what it is, until it isn’t was a great mantra she told me.  But once my baby was born, it would go away and I wouldn’t look back.

5. Visualise and own your experience

Lastly as part of the Sophrology learning’s, visualisation is key.  My beautiful friend Simone had recently had an elective C-section with her son Jack at the same hospital I was to have Georgie.  I asked Simone to talk me through everything that happened to her on that day.  Ensuring she missed out no details, so I could put myself in her place and visualise my birth plan.  This was the best thing I ever did, as there were no surprises on the day.  & When things got a little scary (such as when my spinal wouldn’t go in) I pushed away words such as pain and fear and welcomed words such as calm and in control.

Plus having bonded with my unborn son already, I was excited to put a face to a new love of my life.

These all sound like everything ticked into place for me and in some respects, they did.  But if it hadn’t been for the incredible support of my husband and family, I wouldn’t be in the strong place I feel I am now.

I would love for you to share your stories in the comments or link below any blog posts that may help woman with how they are feeling post birth. x